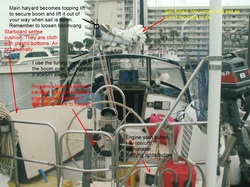 Turns out, according to Dan Wallace,  the T34-2 is a very capable offshore cruiser.  Here is Dan's story:

Most of my sailing was offshore during passages. I went from NC to Annapolis then to Key West then to the Dominican Republic and back. I arranged for a couple to sail it back from the Dominican Republic for me. They thought it was a dream cruise but lost thier nerve at the last moment so I had to go and bring her back myself. I never had crew for more than a daysail although sometimes a girlfriend would visit for a week. Singlehanding a sailboat 5000+ seamiles without an autopilot of some sort was, in looking back, a killer of the dream of cruising. I did learn quickly to adjust my sails so that Wandering Star could sail without me at the helm constantly. Fickle winds and heavy seas get to a man after awhile.

I had a knockdown that seriously tested me and the boat. The force was so great that it threw the stove knobs off the stove. One took me three weeks to find. Another hit the breaker panel so hard that it broke a breaker arm. She came through with flying colors tho, righting herself immediately. The motor never skipped a beat and that's with the top of the sail underwater some 3 feet. I was coming into Ponce De Leon inlet north of Cape Canaveral at night in heavy seas and forgot to look behind me. It is one of the very worst inlets even in good weather. Anyway, the insurance company spent some  $23k for repairs and replacing broken and lost items. In all, most damage was personal property damage. The amount was high due to replacing things that would eventually go bad due to immersion.